This time I don't have pictures of my own.  But this recipe is incredible and I would highly encourage you to try it!  I have included the link to the blog where I found it.  Please visit to see her amazing photo detailed recipe.  Recipe taken from Smitten Kitchen.  My changes are in italics.

Mediterranean Eggplant and Barley Salad
Gourmet, September 2006
Makes 4 (main course) or 8 (side dish) servings
1 1/2 lb eggplant, cut into 1/2-inch cubes
3/4 lb zucchini, cut into 1/2-inch cubes I omitted this because they are not in season right now & too expensive
10 tablespoons extra-virgin olive oil
1 teaspoon salt
1 teaspoon black pepper
1 cup chopped scallion (from 1 bunch)
1 1/2 teaspoons ground cumin
1/2 teaspoon ground coriander I omitted this
1/4 teaspoon cayenne (note: I used 1/8 tsp. and it was plenty spicy; adjust to taste)
1 1/4 cups pearl barley (8 oz)
1 (14-oz) can reduced-sodium vegetable or chicken broth (1 3/4 cups) I used my freshly made stock!
3/4 cup water
2 tablespoons fresh lemon juice
1 garlic clove, minced
1/4 teaspoon sugar
1/2 lb cherry tomatoes, quartered
1/3 cup Kalamata or other brine-cured black olives, pitted and halved I omitted this
1/2 cup thinly sliced red onion, rinsed and drained if desired
1 cup chopped fresh flat-leaf parsley
1/2 cup chopped fresh mint
1/2 cup fresh feta cheese
Roast eggplant and zucchini: Put oven racks in upper and lower thirds of oven and preheat oven to 425°F.
Toss eggplant and zucchini with 5 tablespoons oil, 3/4 teaspoon salt, and 3/4 teaspoon pepper in a bowl, then spread in 2 oiled large shallow (1-inch-deep) baking pans. Roast vegetables in oven, stirring occasionally and switching position of pans halfway through baking, until vegetables are golden brown and tender, 20 to 25 minutes total. Combine vegetables in 1 pan and cool, reserving other pan for cooling barley.
Cook barley: Heat 2 tablespoons oil in a 3- to 4-quart heavy pot over moderately high heat until hot but not smoking, then cook scallion, cumin, coriander, and cayenne, stirring, until fragrant, about 1 minute. Add barley and cook, stirring until well coated with oil, 2 minutes more. Add broth and water and bring to a boil. Reduce heat and simmer, covered, until all of liquid is absorbed and barley is tender, 30 to 40 minutes. Remove from heat and let stand, covered, 5 minutes. Transfer to reserved shallow baking pan and spread to quickly cool, uncovered, to room temperature, about 20 minutes.
Make dressing and assemble salad: Whisk together lemon juice, garlic, sugar, and remaining 1/4 teaspoon salt, 1/4 teaspoon pepper, and 3 tablespoons oil in a large bowl. Add barley, roasted vegetables, and remaining ingredients to bowl with dressing and toss until combined well. Serve with cheese slices.
Do ahead: Salad can be made 1 day ahead and chilled, covered. Return to room temperature before serving.  It was even better after it sat for a day.  The onions soaked up all the dressing and were so tasty.
Posted By: Tracy
Posted by Tracy at 6:21 AM No comments: 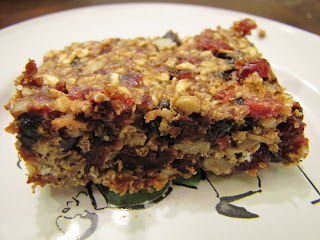 Directions:
Preheat the oven to 350 degrees F. Coat a 9 by 13-inch baking pan with cooking spray.
Place all ingredients except the syrup, honey and eggs in a food processor and pulse until the mixture is finely chopped. Add the syrup and eggs and pulse until the mixture is well combined. It will resemble a coarse paste.
Transfer to the baking pan and spread evenly. Bake until just done, about 20 minutes. Cut into 20 squares.
Tips:
This is a very adaptable recipe.  The original recipe come from Ellie Krieger from Food Network.  I omitted, added and changed the ingredients to fit my taste.  You can do the same, open your pantry and be creative!  I'd love to hear what you came up with!
Posted By: Tracy
Posted by Tracy at 6:13 AM No comments:

I adapted this recipe from thepioneerwoman.com. She has a lot of delicious recipes with great pictures detailing each step.
This is amazing and I highly recommend you try some for your family. Making homemade dressings are economical and a healthy way of eating - they do not have additives or high fructose corn syrup. Although, ranch dressing is not the healthiest choice, oh well :) I hope you enjoy it as much as we did! 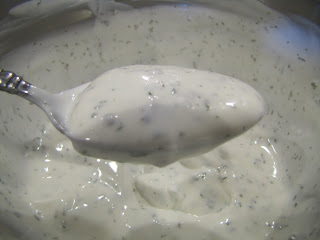 1 c. mayo (I used Hellmann's light)
1/2 c. greek yogurt (you could use sour cream as well)
buttermilk until desired consistency (you could use regular milk)
1 clove of garlic, mashed
pinch of kosher salt
1/4 c. parsley
2 T. chives
dash dill
combine mayo and yogurt in bowl, set aside. chop garlic, sprinkle with salt and then mash with a fork. add to mayo/yogurt mix. add all herbs and stir to incorporate. slowly add buttermilk until desired consistency. taste it and add more salt or herbs as needed. refrigerate for 2 hours and serve.
* I didn't have fresh herbs on hand so I used dried. If you go the same route use less than the recipe call for, it tends to have a stronger flavor being dried. Fresh would definitely make this dressing better, but if you don't have it dried worked just fine.

The Anatomy of an Enchilada

There are four basic components to any enchilada: tortillas, filling, sauce, and topping.

Tortillas come in two basic varieties: corn and flour. Both varieties are common in Tex-Mex cooking, although corn tortillas are much more traditional in Mexico.

* Corn tortillas are made from a simple mixture of water and masa harina, a specially treated corn flour.
* Flour tortillas are made from wheat flour and usually contain baking powder and shortening or lard. They're larger and thinner than corn tortillas, and because the wheat flour allows the dough to be stretched without crumbling.
* Both varieties of tortilla are kneaded into a pliable dough, pressed or rolled into thin discs, and cooked quickly on a hot iron griddle.
* Unless you are using tortillas that are literally "hot off the press," your best bet is to heat tortillas briefly in a hot pan with a small amount of oil to make them pliable and resistant to tearing.
* If you have a well-seasoned cast iron skillet, you can skip the oil and just heat the tortillas for about thirty seconds per side.
* Stack them in a clean kitchen towel to keep them warm and soft until you're ready to fill and roll the enchiladas.

Enchiladas can contain a variety of fillings: shredded meats such as beef, pork, or chicken, as well as vegetables, beans or cheese.

* After spreading a spoonful of your favorite filling down the middle of a tortilla, add a stripe of sauce.
* Roll it up tightly and place it in a baking dish, seam-side down.
* Continue filling the enchiladas, lining them up in the dish side by side; cover them with more sauce before baking.

Enchilada sauce in the American kitchen falls into three basic categories to match the colors of the Mexican flag: red, white and green.

* Red sauce has a deep and rich taste derived from its base of both dried and fresh chiles, often with the addition of tomato puree. Many red enchilada sauce recipes you will see call for chili powder. Chili powder is not a single spice, but rather a custom blend of dried red chiles, cumin, oregano, garlic and salt.
* Green sauce has a light, fresh taste thanks to its base of fresh green chiles. Both red and green enchilada sauces are seasoned with garlic, onions, cumin, salt and pepper.
* Finally, the most distinctly American of the three varieties is the white sauce enchilada. "White sauce" often consists of nothing more than sour cream, although it is often mixed with diced green chiles, fresh herbs, lime juice, or even condensed soup.

* Sprinkle shredded cheese generously over the top of the enchiladas, then bake them in a moderate oven--350 degrees F (175 degrees C)--until the enchiladas are heated through, the sauce is nice and bubbly, and the cheese is melted. This should take about 30 minutes. (Cover pan with foil if you'd like to keep the edges of the enchiladas soft.)
* Meanwhile, prepare your favorite accompaniments: sour cream, chopped cilantro, thinly sliced red onions, diced tomatoes, chopped olives, salsa and guacamole, or anything else that makes your Tex-Mex feast feel complete!

* Cuisine of Texas
* Cuisine of the Southwest
* Classic Tequila Cocktails
Posted by Debi Walter at 4:38 PM No comments: 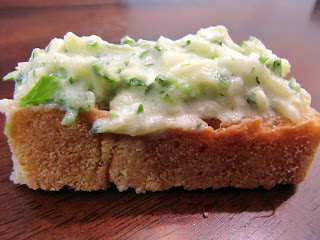 This is delicious with a nice crispy bread and not to mention it is healthy too!
3 cups of zucchini, shredded
2-3 cloves garlic, minced
2 T. lemon juice
2 T. olive oil
4 T. cilantro, finely chopped
1/2 t. cumin
1 c. plain Greek yogurt
salt and pepper to taste
Shred the zucchini and place in a colander for 30 minutes to drain extra juice. Mix all together and refrigerate for an hour before serving.
Posted by Tracy at 12:47 PM No comments: 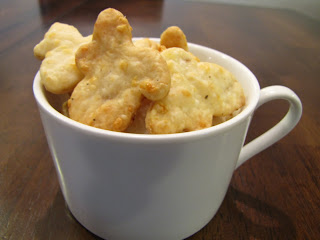 1 cup flour
1 cup shredded cheese (use whatever you want)
4 T. cold butter, cut up in chunks
1/2 t. salt
1/2 t. pepper
4 T. water
Preheat oven to 350 and line 2 baking sheets with parchment paper or lightly coat with oil. Combine all ingredients, except water, in a food processor. Pulse until well incorporated. Add water 1 T. at a time until it turns into a soft dough. Wrap dough in plastic wrap and put in refrigerator for 20 minutes. Once chilled, roll out dough and use a small cookie cutter. Place on prepared cookie sheets and bake for 15-20 minutes until puffy and golden.
Posted By: Tracy
Posted by Tracy at 9:43 AM 4 comments: 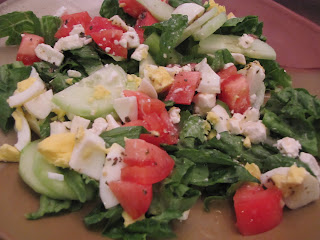 Creamed Corn with Jalapeno and Thyme 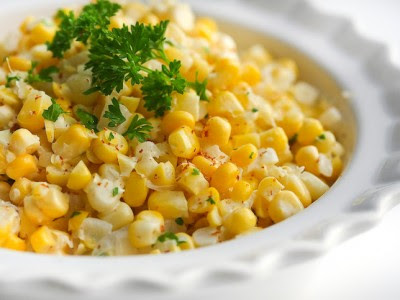 I had this dish at The Commander's Palace in New Orleans several years ago. It was so amazing I bought the cookbook, Commander's Kitchen, which included the recipe. Here it is for you to try - and with corn so abundant this year (and inexpensive) it won't break your budget either.

Stand an ear of corn inside a large bowl, and using a small knife, remove the kernels, being sure not to cut into the cob. When all the corn has been scraped off, scrape the cob with the back of a knife, break the cob in half, and place in a large pot. Repeat with the remaining corn.

Pour the cream into the pot. It probably won't cover all the cobs. Season with salt and pepper and bring to a boil, taking care not to let the cream boil over. Stir and simmer for about 15 minutes, or until the cream starts to thicken. Using tongs, remove the cobs.

Add the corn and the jalapeno to the pan and simmer for about 5 minutes, stirring occasionally. The corn should be tender. Add the thyme, stir in the butter and adjust the seasoning as needed.

We want to hear about your brag worthy recipes! Post it here for everyone to taste. Here are a couple things we ask for you to include in your post.
- Include labels. This makes it easy to find your recipe
- Include your name or if it isn't your recipe credit the person
- Give clear directions, measurements and times
- We always love a good picture
Go find, create and cook amazingly brag worthy recipes!