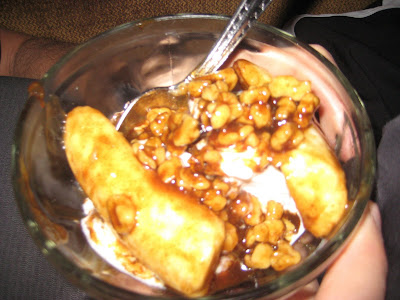 In a large, deep skillet over medium heat, melt butter. Stir in sugar, rum, vanilla and cinnamon. When mixture begins to bubble, place bananas and walnuts in pan. Cook until bananas are hot, 1 - 2 minutes. Serve at once over vanilla ice cream. 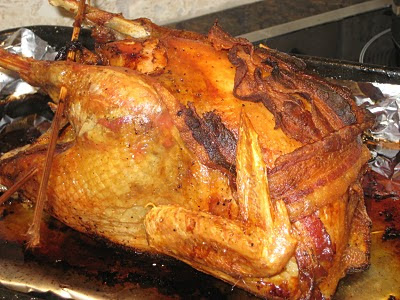 For the pheasant: Preheat oven to 375 degrees F.

For the sauce: In a medium saucepan, combine the whiskey, orange juice and orange zest, and bring to a boil. Lower the heat and simmer, stirring occasionally, until reduced by 50 percent in volume. Add the currant jelly, salt and cayenne and stir well.

Cook until thickened, about 2 - 3 minutes. Remove from the heat and pour into a decorative bowl. Cool slightly before serving.

Remove the bacon from the pheasant, if desired, and cut each bird in half. Discard the oranges and thyme in the cavity. Serve hot with Whiskey-Cumberland Sauce and wild rice.

We want to hear about your brag worthy recipes! Post it here for everyone to taste. Here are a couple things we ask for you to include in your post.
- Include labels. This makes it easy to find your recipe
- Include your name or if it isn't your recipe credit the person
- Give clear directions, measurements and times
- We always love a good picture
Go find, create and cook amazingly brag worthy recipes!